NSW has recorded more than a thousand new COVID-19 cases in a single day for the first time in months, while hundreds of people in Melbourne have been told to isolate after an Omicron case visited two nightclubs.

The daily tally of new COVID-19 infections in NSW has jumped by more than 500, as the state braces for further surges with unvaccinated people now free to shop and socialise in NSW.

It is the first time in months the state has recorded more than a thousand new cases in a single day, and comes as the unvaccinated enjoy renewed freedoms.

From Wednesday, unvaccinated people in NSW are subject to the same restrictions as those who have been fully vaccinated against COVID, for the first time in three months.

The NSW government has also honoured its pledge to significantly ease restrictions despite a sharp rise in case numbers amid super-spreading events in the festive season.

QR code check-ins will be scaled back and masks are only required in high-risk settings like public transport and planes.

There is no cap on visitors in homes, hospitality venues, or on numbers at outdoor gatherings.

Business NSW says dropping the QR code check-in to enter shops, and ditching the requirement for customers to show their vaccination status, will give business owners a much-needed boost in the countdown to Christmas.

“This is the early Christmas present business owners and their employees have been waiting for,” Business NSW Chief Executive Daniel Hunter said on Wednesday.

Meanwhile, NSW Health says fully vaccinated arrivals from eight southern African countries of concern where the Omicron variant of COVID-19 emerged will no longer have to enter 14 days hotel quarantine, bringing all international arrivals under the same measures.

Chief Health Officer Dr Kerry Chant said all fully vaccinated international arrivals must self-isolate for 72 hours, have a negative result within the first 24 hours of arrival and avoid high-risk settings for a week.

The latest easing of restrictions — long-planned for December 15 — comes just as case numbers spike to a two-month high.

Infection numbers have more than quadrupled in the past two weeks.

Superspreader events are driving the spike, among them an outbreak at the Argyle House nightclub in Newcastle on the night of December 8, with more than 200 out of 680 revellers since testing positive.

Of the new infections, 21 were the Omicron variant taking the total cases of the new strain to 85. Victoria has reported 1405 new COVID-19 cases and a further three deaths, as more than 700 people are forced into isolation after an Omicron-infected patron visited two Melbourne nightspots.

The state was now managing 10,781 active cases, the health department confirmed on Wednesday.

There are 365 patients in hospital, 84 of whom are actively infected with the virus in intensive care and 46 on ventilators.

It is Victoria’s highest number of hospitalisations since November 16, when 394 people were in hospital with the virus.

The seven-day hospitalisation average is also on the rise, growing to 335.

Testers processed 77,066 results on Tuesday, while 10,781 people were vaccinated in state-run hubs.

An Omicron case was confirmed to have attended Sircuit Bar in Fitzroy between 9pm and midnight on Friday and then Collingwood’s Peel Hotel between 11.30pm and 3am.

It is estimated about 410 people were at Sircuit and another 320 were at the Peel Hotel at those times.

All have been deemed close contacts and must get a PCR test immediately and isolate at home for seven days if fully vaccinated, or 14 if not.

Patrons who entered Sircuit from 6pm to 9pm are also being contacted and asked to self-identify if they were there beyond 9pm, with authorities strongly advising them to get tested and isolate until they receive a negative result.

“We’re still learning more about this variant, so we’re taking careful steps to ensure the safety and health of everyone in the community,” the health department said on Wednesday.

Despite the state reporting at least six Omicron cases to date, the Victorian government is weighing up easing restrictions this week.

It was flagged in mid-November that mask-wearing in retail stores would be ditched after December 15, in line with NSW settings, unless there was a “significant jump” in hospitalisations.

But on Wednesday the government was yet to announce any changes, saying it depends on updated health advice before the state’s first pandemic declaration comes into effect at 11.59pm on Wednesday, replacing the current state of emergency. The prime minister has returned two negative COVID-19 tests after he was deemed to be a casual contact by NSW Health.

Scott Morrison was notified late on Tuesday night an event he was at on the previous Friday evening was an exposure location but has since been told he does not need to isolate.

It is understood that NSW Health and the chief medical officer provided advice to the prime minister that an event at Kirribilli House with South Korean President Moon Jae-in could go ahead on Tuesday night.

Mr Morrison will receive another test on day six of his exposure in line with NSW Health guidelines with his planned trip to Queensland on Wednesday to go ahead.

But passengers on two flights are not so lucky after being told they will need to spend Christmas in quarantine.

Passengers on a flight from Newcastle to Brisbane and one from Brisbane to Townsville, both on Monday, were deemed by Queensland Health to be close contacts and will spend two weeks in quarantine despite being fully vaccinated.

“Queensland is prepared to give the premier some slack but please don’t overreact. Let us understand the science before you’re asking us to have our rights impinged, particularly at Christmas time.”

Deakin University chair of epidemiology Catherine Bennett hopes the government will review the decision due to the low risk of transmission on a plane, where everyone has masks.

Professor Bennett said while Omicron was more transmissible and there had been evidence of the variant infecting people on planes, people further away from the positive person were unlikely to catch the virus.

“If they are not seeing anyone turn positive or only people sitting close then they might be able to ease the requirements on those people sitting further away,” she told Sky News. 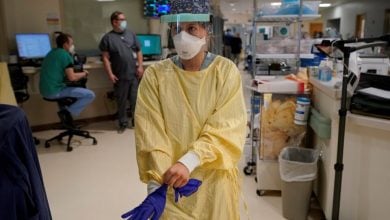