A temporary exhibition at the Byzantine and Christian Museum tells the remarkable story of one of largest and most important sea battles in Mediterranean history.

A fascinating exhibition at the Byzantine and Christian Museum in Athens, featuring a rich display of paintings, maps, shipboard artifacts, and arms and armor, explores the story of the Battle of Lepanto, a seismic naval engagement that took place in the Gulf of Patras, western Greece, 450 years ago on October 7, 1571.

Organized in the context of the museum’s anniversary program “From the Fall of Constantinople to the Greek Revolution, 1453-1821,” commemorating the bicentenary of the start of the Greek War of Independence, visitors to the exhibition are immersed in the Mediterranean world of the 16th century, a time of rampant Ottoman military expansion and conquest.

As Europe was tearing itself apart by its own wars of religion following the Protestant Reformation, the Ottomans were busily making inroads into the eastern Mediterranean and the Balkans, conquering Cyprus in early 1571 and establishing control over much of Greece. Under the command of the Grand Admiral Ali Pasha, a mighty Turkish fleet sailed westwards, deeper into the Ionian Sea, where, 40 nautical miles west of Lepanto (Naupactus) on October 7, it came face to face with the fleet of the Holy League, a coalition of Catholic states (Spain and most of Italy) organized by Pope Pius V.

The fate of Europe hung in the balance.

The Christian fleet engaged the Ottoman ships at point blank range, making use of small projectile weapons to immobilize their onboard infantry before ramming them. In the history of naval warfare, the Battle of Lepanto was both the culmination and the end of naval combat with oared vessels, famously used in the ancient sea battles of Salamis (480 BC) and Actium (31 BC).

The Christians scored a stunning victory, largely attributed to the skill and cunning of the Commander-in-Chief of the Venetian fleet, Sebastiano Venier (1496-1578). His decision to replace nearly all the swordsmen onboard his ships with musketeers and arquebusiers (soldiers who fought with an early type of long gun) played a crucial role in the victory, inflicting heavy casualties among the Ottoman combatants.

Don Juan of Austria (1547-1578) was overall commander of the allied fleet, brother of king Philip II of Spain. Despite his young age, he inspired high morale among his men, and played an important role in the victory.

The Battle of Lepanto was a turning-point in conflict with the Ottoman Empire, serving to undermine the invincibility of Ottoman military power in the Mediterranean and dealing a decisive blow to its territorial ambitions in Europe.

Among the many artifacts on display in the exhibition include items from a 16th century Spanish shipwreck, discovered during a pioneering underwater archaeological survey in 1971-1972 by Peter Throckmorton and Harold Eugene “Doc” Edgerton. The well-preserved shipwreck, located on the Sinialo reef outside the harbor of Zakynthos and dating to the time of the battle, offers a rare insight into the shipbuilding techniques of the time.

The exhibition features a good deal of material on the main protagonists, including sketches and portraits of the the various commanders of the allied fleets, as well as items related to the famous Spanish writer Miguel de Cervantes (1547-1616, author of Don Quixote), who fought in the battle on board the galley Marquesa. Various arms and armor are also on display, including a bronze cannon, swords, and various firearms.

Part of the exhibition also explores what life was like on board for the galley crews, many of whom were either slaves, prisoners of war, or convicted criminals. At Lepanto, around 12,000 Christian slaves who had served in the Ottoman fleet were liberated after the battle. Similarly, many common criminals condemned to service onboard Christian ships were pardoned.

Finally, the exhibition examines the impact of the battle on the arts, from its immediate aftermath to today, from epic poetry and Renaissance music, to 20th century film.

For more information about the Byzantine and Christian Museum, visit here.

This article first appeared in Greece-Is.com, an English-language publishing initiative by Kathimerini.

Australia surges past COVID-19 milestone of more than 500,000 cases since pandemic began

Archdiocesan District of Perth : Cutting of the Vasilopita at Hellenic Aged Care Dianella 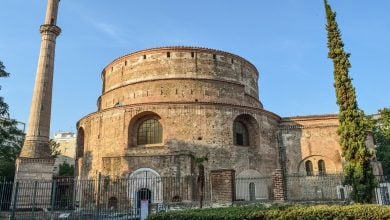