LONDON – Shifting its position and putting more pressure on the British Museum and the the United Kingdom government, The Times of London called for the return of the stolen Parthenon Marbles to Greece.

Still calling them The Elgin Marbles – named for the 19th Century Scottish diplomat who ripped them off the Parthenon 200 years ago and taking them home before selling them to the museum, The Times noted it was reversing its own former hard editorial stance against their return.

In an editorial entitled Uniting Greece’s Heritage, the newspaper said, “For more than 50 years, artists and politicians have argued that artefacts so fundamental to a nation’s cultural identity should return to Greece. The museum and the British government, supported by The Times, have resisted the pressure,” it said.

“But times and circumstances change. The sculptures belong in Athens. They should now return,” the paper said, after Prime Minister Boris Johnson earlier rebuffed Greek Premier Kyriakos Mitsotakis’ call for him to intervene.

“The Elgin Marbles are sublime in their depiction of the human form and the impression of movement. Millions have marvelled at these sculptures that once adorned the Parthenon and for the past two centuries have reposed in the British Museum, among the most beautiful of all its holdings,” the editorial added.

Johnson, a scholar of Classical Greece had been for their return but now said it’s none of his business and the British Museum can’t be subject to political pressure, its board claiming the Greek treasures belong to the English.

The theft of the marbles, said the museum’s Director Hartwig Fischer – a German art historian – was a “creative act,” defending their theft.

The Times’ change came just after the Regional Archeological Museum of Antonino Salinas in Palermo loaned Greece another stolen piece from the Parthenon after it acquired it from another British diplomat’s estate.

The fragment, which shows the foot of the goddess Artemis peeking out from under her tunic, returned to its natural place in the segment of the frieze depicting the gods of Olympus observing the delivery of the veil to Athena.

It’s on an eight-year loan following a decision by the Italian Ministry of Culture that Greece hopes could lead to reunification of the sculptures.

The British Museum’s new President, former Chancellor of the Exchequer George Osborne, earlier wrote in The Times about lending Greece its own marbles, indicating they would never be returned.

“Sure, there are those who question our right to exist — they did back in 1753 and then do so again in 2021. Of course, there are those who demand the return of objects they believe we have no right to hold. That is not new either. Lord Byron thought the Elgin marbles should be back at the Parthenon,” he said.

“Our response is not to be dismissive. We are open to lending our artefacts to anywhere who can take good care of them and ensure their safe return — which we do every year, including to Greece,” he added, which would essentially require Greece to agree the marbles belong to the British Museum.

“Museums of culture should not shrink in the face of the culture wars. We need to tell the story of our common humanity. That’s why the case for the British Museum has never been stronger than it is today,” he said, before the paper then changed its position.

Greece had opened a new Acropolis Museum in 2009 to answer the British Museum’s claim that the country had no safe place to show its own marbles but after that the British switched to other arguments.

Tatiana the Martyr of Rome (12 January) 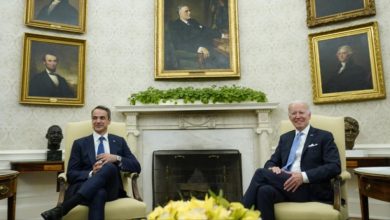