This wonderful saint was the son of noble and prominent parents. He was born in Rome, where his father was an official in the imperial service, though he died in the saint’s childhood. His mother, Anthia, had heard the Gospel from Saint Paul and was, in fact, baptized by him. Given the fact that she was a widow, she entrusted her son’s education to the Bishop of Rome, Anacletus (or Anectus or Anencletus).

The Bishop saw how promising the young boy was and how he was illumined by the grace of God and so ordained him deacon when he was no more than fifteen, priest at eighteen and bishop at twenty.

He more than made up in wisdom what he lacked in years, and became Bishop of the Illyricum province, with his seat in Valona, in what is now Albania. His flock increased, but the Emperor Hadrian (117-138), persecuted Christians and sent a commander (comes) called Felix, with a detachment of soldiers, to fetch Eleftherios to Rome. Felix arrived in Valona and went into the church there, but when he saw and heard Eleftherios, his heat softened and he became Christian.

When Eleftherios arrived in Rome, he was subjected to dreadful tortures, but withstood them so well that Choribus, the governor in charge of his punishment, was also persuaded to become a Christian. Both he and Felix were tortured and beheaded. Then it was Saint Eleftherios’ turn to be martyred. His mother Anthia found the remains of he dead son and embraced them, before also being beheaded. This was in about the year 126. 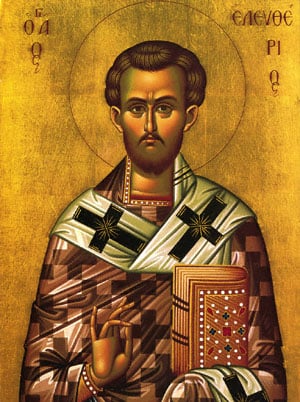 Apolytikion of Hieromartyr Eleutherios and Anthia

Adorned with flowing priestly vesture and with dripping streams of blood you at once went to your Lord Christ, O blessed wise Eleftherios, annihilator of Satan. Wherefore, do not cease to intercede for those who honor your blessed struggles in faith.

Collection and distribution of Childrens toys from All Saints Parish in Belmore, Sydney

Epiphaniy of Kyiv to Patriarch of Alexandria: Kirill has no Christian motive, he only wants revenge