Theodosius the Great was Roman Emperor from 379 to 395. Theodosius was the last emperor to rule over both the eastern and the western halves of the Roman Empire. On 27 February 380, he declared “Catholic Christianity” the only legitimate imperial religion, ending state support for the traditional Roman religion.

On 27 February 380 he, Gratian and Valentinian II published the so called “Edict of Thessalonica” (decree “Cunctos populos”, Codex Theodosianus xvi.1.2) in order that all their subjects should profess the faith of the bishops of Rome and Alexandria (i.e., the Nicene faith). The move was mainly a thrust at the various beliefs that had arisen out of Arianism, but smaller dissident sects, such as the Macedonians, were also prohibited.

In May 381, Theodosius summoned a new Ecumenical Synod at Constantinople (First Synod of Constantinople) to repair the schism between East and West on the basis of Nicene orthodoxy. “The synod went on to define orthodoxy, including the mysterious Third Person of the Trinity, the Holy Spirit, who, though equal to the Father, ‘proceeded’ from Him, whereas the Son was ‘begotten’ of Him.” The synod also “condemned the Apollonarian and Macedonian heresies, clarified jurisdictions of the state church of the Roman Empire according to the civil boundaries of dioceses and ruled that Constantinople was second in precedence to Rome.”[1]

Theodosius died, after suffering from a disease involving severe oedema, in Milan on 17 January 395. Saint Ambrose organized and managed Theodosius’s lying in state in Milan. Ambrose delivered a panegyric titled De Obitu Theodosii before Stilicho and Honorius in which Ambrose detailed the suppression of heresy and paganism by Theodosius. Theodosius was finally buried in Constantinople on 8 November 395.

Thessalonica is a large and populous city, in the province of Macedonia. In consequence of sedition there, the anger of the Emperor [Theodosius] rose to the highest pitch, and he gratified his vindictive desire for vengeance by unsheathing the sword most unjustly and tyrannically against all, slaying the innocent and guilty alike. It is said seven thousand perished without any forms of law, and without even having judicial sentence passed upon them; but that, like ears of wheat in the time of harvest, they were alike cut down.

When Ambrose heard of this deplorable catastrophe, he went out to meet the Emperor, who—on his return to Milan—desired as usual to enter the holy church, but Ambrose prohibited his entrance, saying: “You do not reflect, it seems, O Emperor, on the guilt you have incurred by that great massacre; but now that your fury is appeased, do you not perceive the enormity of your crime? You must not be dazzled by the splendor of the purple you wear, and be led to forget the weakness of the body which it clothes. Your subjects, O Emperor, are of the same nature as yourself, and not only so, but are likewise your fellow servants; for there is one Lord and Ruler of all, and He is the maker of all creatures, whether princes or people. How would you look upon the temple of the one Lord of all? How could you lift up in prayer hands steeped in the blood of so unjust a massacre? Depart then, and do not by a second crime add to the guilt of the first.”

The Emperor, who had been brought up in the knowledge of Holy Scripture, and who knew well the distinction between the ecclesiastical and the temporal power, submitted to the rebuke, and with many tears and groans returned to his palace. The Emperor shut himself up in his palace and shed floods of tears. After vain attempts to appease Ambrose, Theodosius himself at last went to Ambrose privately and besought mercy, saying: “I beseech you, in consideration of the mercy of our common Lord, to unloose me from these bonds, and not to shut the door which is opened by the Lord to all that truly repent.” Ambrose stipulated that the Emperor should prove his repentance by recalling his unjust decrees, and especially by ordering “that when sentence of death or of proscription has been signed against anyone, thirty days are to elapse before execution, and on the expiration of that time the case is to be brought again before you, for your resentment will then be calmed and you can justly decide the issue.” The Emperor listened to this advice, and deeming it excellent, he at once ordered the law to be drawn up, and himself signed the document. St. Ambrose then unloosed his bonds.The Emperor, who was full of faith, now took courage to enter the holy church where he prayed neither in a standing, nor in a kneeling posture, but throwing himself upon the ground. He tore his hair, struck his forehead, and shed torrents of tears, as he implored forgiveness of God. Ambrose restored him to favor, but forbade him to come inside the altar rail, ordering his deacon to say: “The priests alone, O Emperor, are permitted to enter within the barriers by the altar. Retire then, and remain with the rest of the laity. A purple robe makes Emperors, but not priests.” Theodosius meekly obeyed, praising Ambrose for his spirit, and saying: “Ambrose alone deserves the title of bishop.” 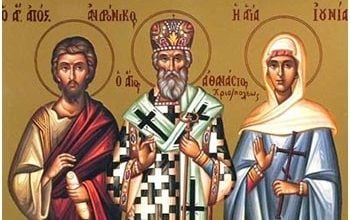