Facebook Twitter Pinterest Reddit Share via Email Print
Verses
You bore the name of the gift of Christ,From your dead body there ever gushes forth healings O Father.On the twelfth Theodore flew off from earth to heaven.
Saint Theodore was born in Koroni in southern Messenia of the Peloponnese, sometime between the years 870 and 890. His mother had previously been barren and when God granted her a child she gave him the name Theodore. Before he was orphaned at a young age he received an education under the Bishop of Koroni, who ordained him a Reader. After the death of his parents he went to Nafplio where he was reared by a family friend who also was a Priest.
When he reached adulthood Theodore entered a certain melancholia for the sins of the world. At first he sought solace by entering into marriage and having two children. Having developed a reputation of sanctity and virtue, Bishop Theodore of Argos had him ordained a Deacon. The sadness persisted however, and his sorrow led him to leave his family and Nafplio and go to Rome, where he hoped to find spiritual fulfillment in monastic life. Finding Rome to be a rather worldly place, however, he moved to Monemvasia, where he stayed for some time in a cell of the Church of the Theotokos of Diakonia, praying there without ceasing.
Later, the wife of Theodore contacted him through the local bishop by letter, imploring him to return home, so that she could receive his permission to be tonsured. Theodore however discerned the hand of the devil in this request, so he ignored it. After a year, Theodore departed Monemvasia on a Roman fleet and arrived in Kythera in the year 921. There a clash broke out between the Romans and the Muslim pirates, and after the Romans were victorious and cleared the island, they dropped Theodore off on the island with his companion and fellow-ascetic Anthony. There they were in search of higher spiritual good things by living on a desolate and uninhabited island (it was desolate because of Saracen raids). Therefore they lived there in asceticism, away from the luxuries of the world. Due to the raids of Saracens from Crete they stayed in the ancient Church of Saints Sergius and Bacchus. After a short period of extreme asceticism, Anthony decided to return to the softer life of Monemvasia, and not long after Theodore reposed in peace on May 12, 922.
Not long after his death, soldiers were passing by Kythera and went to worship at the Church of Saints Sergius and Bacchus. There they found the dead incorrupt body of the Saint, however the soldiers left it unburied. Three years later, in 925, hunters from Monemvasia discovered his still incorrupt body, and after venerating it with tears, they buried him near the church.
Later residents from Monemvasia rebuilt the Church of Saints Sergius and Bacchus, and they renamed it in honor of Saint Theodore. As the years passed, a monastery grew around this church, and it acquired property on the island. This property was cultivated by both monastics and lay people. At around 1630 Bishop Athanasios (Valerianos) of Kythera restored the Church of Saint Theodore, where various modifications and additions were made. In 1695 there were ten cells with nuns. During the Venetian occupation, this monastery was the seat of the diocese. The grand Roman-style building in the courtyard served as a boys’ school in the years of British rule. A Divine Office to the Saint was published in 1747 in Venice, in 1841 in Smyrna, and in 1899 and 1961 in Athens. Saint Theodore together with Saint Elesa (Aug. 1), are patrons of the island of Kythera.
Once upon a time on the eve of the feast day there used to be a huge celebration, and people would come from all over the island to join in. In the evening sales men would arrive and spread their goods under the trees. They brought farming products, tools and home made produce, and even animals, on which they would stick a flower to show that the animal was for sale. Mini “tavernas” were set up under the trees and the roasts would soon be sizzling on the spit. The crowd would dance and have a general good time till the morning hours. In the morning the priest would bring the Saint’s relics out of the church to bless the people, and the people in turn venerated their patron Saint Theodore. 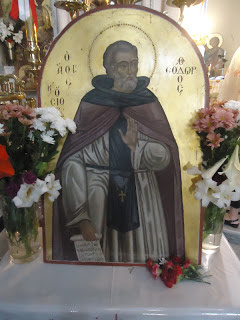 Apolytikion in the Third Tone
An inviolate treasure, the island has, in the placement of your relic, delivering us by the grace of miracles, liberating us from suffering and distress, for which it rejoices in honoring your memory. Venerable Father, entreat Christ God, to grant us the great mercy.
Kontakion in the Second Tone
You fled a life of sweetness and noise, and left children and spouse blessed one, to inhabit the wilderness, and you became an Angel O Venerable one, a zealot worthy of admiration, who ceaselessly intercedes on behalf of all.
Megalynarion
Rejoice the beauty of the Fathers, rejoice the majesty of Venerables and ascetics, rejoice the ornament and boast of Kythera, who expelled demons, rejoice O Theodore. 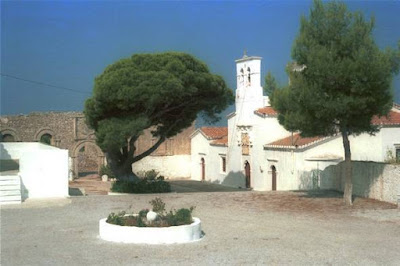 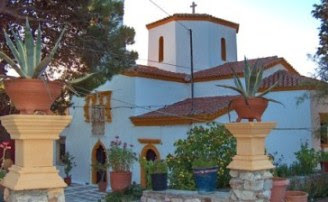 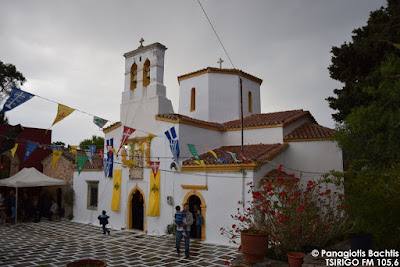 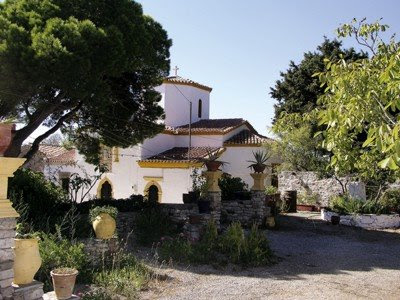 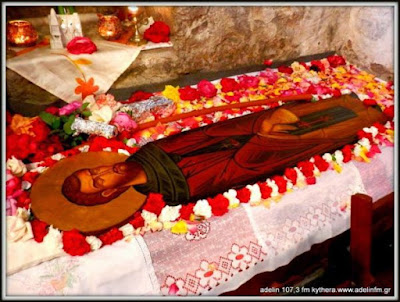 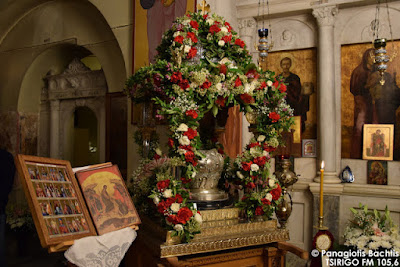 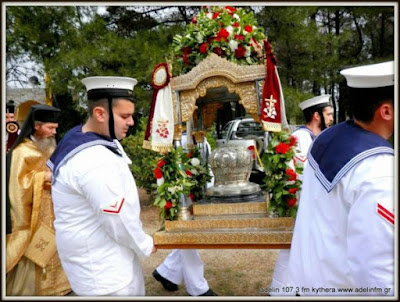 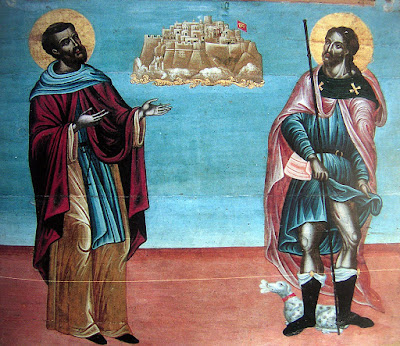 Saint Epiphanius, Bishop of Cyprus (12 May)