On Tuesday the 4th of January, His Grace Bishop Elpidios of Kyanea conducted the annual official blessing and cutting of the Vasilopita in the Conference Room at the Archdiocesan District of Perth offices in Dianella.

Approximately fifty representatives from various local Greek Brotherhoods and Organisations attended. The Vice Consul of the Greek Consulate in Perth, Mr Nikolaos Papakonstantinou, representing the Consul together with representatives from St Andrew’s Grammar Day School and the Cross Bearers of our Holy Archdiocese also attended. Clergy from the Romanian and Serbian Orthodox Churches were also in attendance .

Despite the extreme hot weather conditions, an exceptionally considerable number of faithful from all parishes attended the blessing of the Vasilopita as this gave them the opportunity to exchange wishes with one another for the New Year.

During the evening, His Eminence Archbishop Makarios of Australia gave His paternal blessing and a New Year’s Message via zoom. His Eminence’s words, which brought profound hope to all those listening, emphasised on the importance of loving and having Christ in our lives as well as the significance of lifting our personal cross with joy. His Eminence mentioned that even when we cannot lift our cross then we should at least try to slightly move it forward; we should never abandon it since our cross will lead us to salvation and to the Kingdom of Heaven.

Following the Archbishop’s Message, the young children all gathered in front of the camera and wished His Eminence a Happy New Year. In return, His Eminence also wished the children the same. It was lovely to see our spiritual father reaching out to the younger generation via modern day technology.

Finally, Mr Lambis Bakaimis, representing the Church of the Archangels and The Hellenic Society of Geraldton, found the gold coin in this year’s Vasilopita.

His Grace Bishop Kyriakos of Sozopolis at Mt Melas in Victoria, Australia 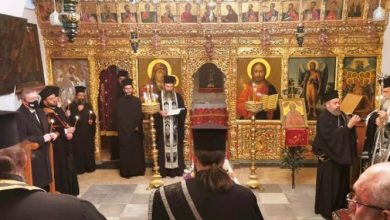 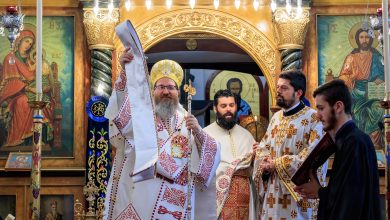